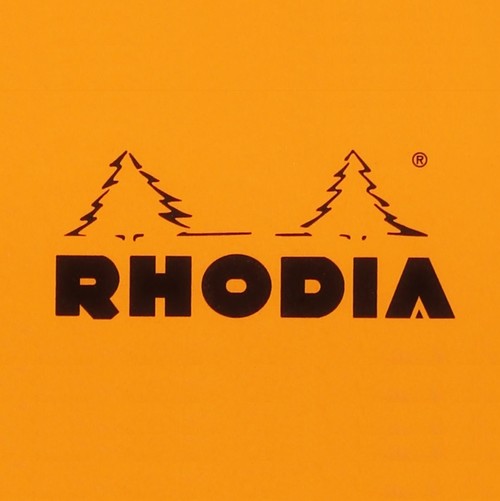 For more than 80 years now, the expertise of Rhodia preserves the excellence and worldwide reputation of the "Made in France" statement.

September 1934, Rhône-France: The birth of an icon.

Who would have thought that a little orange stapled notepad with an unusual logo featuring the outline of two fir trees over beveled lettering would go all around the world?

Rhodia has just celebrated its 80th anniversary! However Rhodia is more than a flagship brand that can proudly claim to have weathered the decades without developing a single wrinkle. It is an iconic brand that has gathered a cult following all over the world and established a genuine, trusting relationship with its customers.

Longevity is an art in itself! The secret of the longevity of the brand with the "two fir trees" is simple: a name, a logo, a style, an emblematic product, all of which are the results of a clever blend of know-how, inventiveness, heritage and modernity.

A name that simply reflects the brand’s origins by the Rhône River (the people from this region are known as "Rhodaniens").

A logo that provides a direct link with the industry. The two joined fir trees symbolize the company’s founding brothers, Henri and Robert Vérilhac. This logo was reportedly drawn spontaneously in a single stroke by Antonia, Henri Vérilhac’s wife, as if it were indisputable. This logo still embodies the "essence" of the brand, to such an extent that Rhodia is often referred to using the circumlocution "the brand with the two fir trees".

A style that is authentic and timeless, full of character, simple and refined and one that has been unmistakably distinctive ever since it was created.

A product, the emblematic stapled notepad, which was the result of a very simple idea: the desire to create a unique, practical, universal article that met the demanding challenge of combining know-how, technical innovation and aesthetics.

For more than 80 years now, the expertise of Rhodia preserves the excellence and worldwide reputation of the "Made in France" statement.

More than a bit of history…

The stationery firm "Papeteries Vérilhac Frères" was founded in Lyon, France, in 1932 by two brothers, Henri and Robert Vérilhac. They came from a family of paper merchants and their market extended from France across all of North Africa. At first they sold notebooks and stationery products, and then, in 1934, they started manufacturing and selling the Rhodia pads. In 1997, Rhodia was bought by Clairefontaine. The production units were then grouped together near Mulhouse (Haut-Rhin, France) and the company Clairefontaine Rhodia was born.

Irreproachable quality and finishes that are based on a long history of stationery expertise Inventiveness and technical innovations (a perfectly waterproof and flexible card cover, a scored cover, "SANGRIF" head staples, a stiff back cover, micro-perforated, removable sheets). A strong focus on aesthetics and a pioneering "orange & black" color scheme that plays on the obvious complementarity of these two colors to reflect dynamism and elegance. All these high standards have forged the Rhodia pad’s "certificate of authenticity", creating a product that is both stylish and contemporary, whatever the epoch.

For more than 80 years, this icon has been the matrix for the brand’s development.

The Rhodia Orange pad is instantly recognizable and has come to symbolize the quintessential notepad, the distillation of France’s finest stationery know-how. It serves as the matrix for the development of all the products that are designed and created today as the company adapts to the needs of today’s mobile, changing daily lifestyles. Every year Rhodia is selling millions of made in France stapled pads in 87 countries worldwide!